Is there anything better than Israeli food? One of the best parts of our country is the unbelievable food. It’s fresh, it’s different, and it’s so delicious. It’s no surprise that Israeli food has become a culinary trend all over the world. Combining different flavors and tastes from a wide range of cultures, Israeli food represents the best of the Israeli melting pot.

When I think of Israeli food there are so many different things that come to mind. Falafel, Israeli salad, hummus, sabich, shakshuka, pitas and so much more. You can find them on almost every street corner and “beit café” (coffee shop) or find Israelis in their kitchens making the homemade stuff (don’t worry, I’ll fill you in on some of the best recipes below!).

Let’s take a look at the foods that Israel is best known for:

Bring Israelis most popular flavors and tastes to your home with Israelibox.

Israelibox sends Israel in a box straight to your home each month. Featuring small businesses and a monthly non-profit, there’s no better way to support Israel and enjoy its products at the same time.

Shakshuka, a dish based on tomatoes and eggs, originated in the Middle East and the former Ottoman Empire. Each place took on its own version, some making it spicy, others with vegetarian and vegan versions and more.

Tunisian Jews first brought shakshuka to Israel, where it has become a massive hit. Shakshuka can be found in most restaurants today in a wide variety of versions and Israelis also love to eat it at home. Add different spices (we recommend the Shakshuka Spice Mix by Ayelet Spices found in our Shuk Basket Box), veggies, cheese and more to change it up.

Want to make shakshuka yourself? Check out our recipe here.

Check out our Israeli Flavors boxes 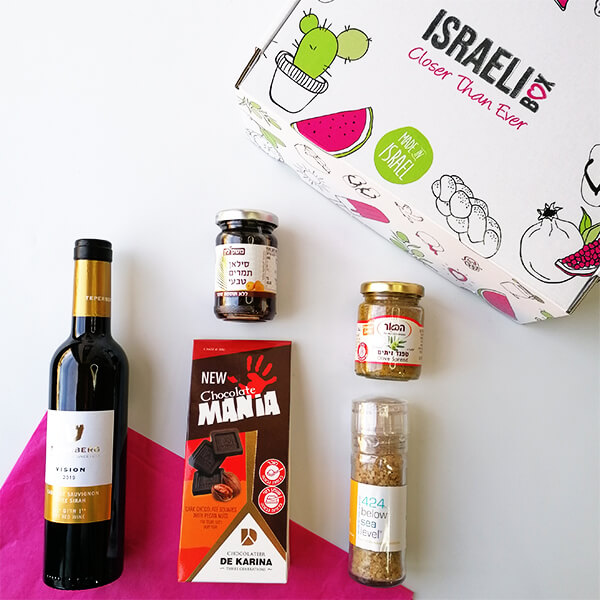 Almost 70% of Israeli have hummus in their refrigerator at all times and 93% (!) of those surveyed said that eat hummus on a weekly basis. I think it’s safe to say that Israelis love hummus.

Hummus, another traditional Middle Eastern dish, is a staple in a wide variety of Middle Eastern countries today as well as all over the world. While its exact background is debated, there’s no doubt that it is one of the most popular foods in Israel. There’s a constant battle between the top hummus places all over the country and you’ll find hummus in all Middle Eastern restaurants as well as falafel joints, coffee shops, etc.

Hummus is made by grinding chickpeas together with tahini (another Israeli favorite), lemon juice, garlic, cumin, salt and olive oil. If you want to add an extra Israeli twist, add Zaatar (available in our Mediterranean and Shabbat boxes). Try it at home, you won’t be disappointed!

Falafel is Israel’s most famous street food. No matter where you are in the country, you’ll be able to find falafel nearby and for an attractive price!

Did you know that falafel was originally made in Egypt (well, this is debated but is the leading theory) with fava beans? Eventually, falafel made its way to the rest of the Middle East where chickpeas took over.

Today, falafel is everywhere in Israel. Grab it on-the-go in a pita when you’re out and about, eat it as a side at a hummus or Middle Eastern style restaurant, or even make it at home! There is a debate in Israel if falafel should be eaten with hummus (since it is made from chickpeas itself). I personally believe yes, but not everyone agrees with me. Top it with tahini, Israeli salad, schoug (spicy), onions, cabbage and anything else you desire. Yum!

Israeli salad is probably the simplest salad you can make, but it’s so good, fresh and satisfying. Here in Israel, we typically call this salad “salat katzuz”, meaning chopped salad.

Israeli salad is everywhere in Israel and you’ll be hard pressed to find a restaurant that doesn’t serve it or a home that doesn’t eat it with lunch or dinner almost every day.

Why do we love Israeli salad so much? Probably because our veggies are so fresh and delicious. The base of Israeli salad is chopped cucumbers and tomatoes, together with onion and bell pepper if desired and topped with lemon, olive oil and salt. Some people like to add fresh parsley on top. Here is our full recipe for Israeli Salad.

I recommend adding it as a side dish to your next meal. Trust me, you won’t regret it.

Ptitim is a classic Israeli dish that you probably know as Israeli couscous.

The story behind ptitim is a classic Israeli one. In the 1950s, rice was scarce in Israel. David Ben Gurion, then Prime Minister of Israel, asked Osem, a leading Israeli food brand, to create a new version of rice based on wheat. This is why ptitim is nicknamed “Ben Gurion rice”.

In Israel, ptitim are considered a kids dish, typically served as a side to a main course such as schnitzel or meatballs. Some like to prepare a “red version”, adding tomato paste and sometimes fried onions.

Jewish Iraqis created sabich in Israel which is based on the typical foods served for breakfast in Iraq.

You can find sabich almost everywhere in Israel, as it’s a widely popular option for a quick, on-the-go meal. Just make sure to take a napkin, it gets messy!

Israeli pita bread is simply… unreal. A round bread with an internal pocket, we love to stuff anything and everything into pita and also to dip it in our hummus (there’s a method, we’d love to teach you when you come to Israel!).

Believe it or not, homemade pita is super easy to make. I make it for my kids to take for breakfast to school and they love it.

Israeli food is the highlight of most family and friend get togethers as well as holidays. Want to learn more about Israeli culture? Check out these posts:

The 10 commandments for hosting a great gathering – Israeli style 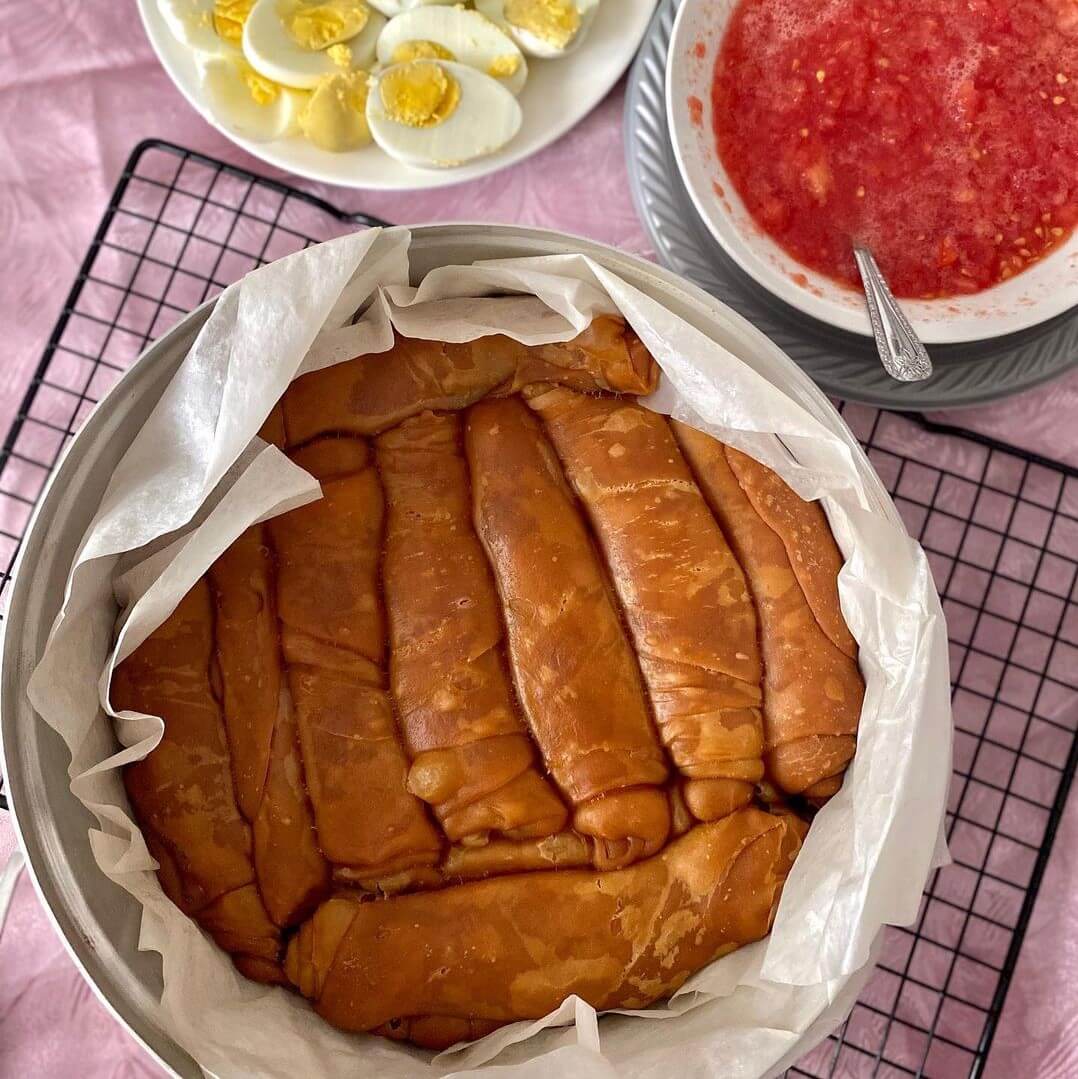 What do Israelis eat on Shabbat?

Bring Israelis most popular flavors and tastes to your home with Israelibox.

Israelibox sends Israel in a box straight to your home each month. Featuring small businesses and a monthly non-profit, there’s no better way to support Israel and enjoy its products at the same time.

Check out our Israeli Flavors boxes